The first TV appearance of the 3 men of JYJ was horrible. It was nothing new but an ‘exhumation’ in order to confirm the assault (T/N: originally부관참시, which literally means to dig up [a person’s] corpse and behead it). The entertainment program of Saturday, which has been coveting the ratings of 10% and boasting about the tradition of dozens of years, exposed the existence of ‘saseang fan’ but I wonder if we had to make do with its significance.

On the 10th, <Entertainment Relay> of KBS 2TV covered the JYJ – sasaeng fans controversy that has recently surfaced. On the 6th, a media unveiled the ‘JYJ assaulting fans’ audio file which was recorded in 2009. JYJ got involved in an ‘assault controversy’.

Among K-POP groups, JYJ is the first group ever to hold a South America tour. They have held an official press conference in Chile on the 8th (local time). They officially apologized and expressed their pain, “Because sasaeng fans are also fans, we thought that we should also endure such excessive love. But in such indescribable pain, our daily life collapsed. We just want to ask them to at least let us live a human life.”

However, after informing that the audio file was edited, <Entertainment Relay> let us hear from the position of the sasaeng fan who was on the spot at that time instead of JYJ’s voice, reigniting the assault controversy. In addition, before the broadcast, <Entertainment Relay> was caught under fire for asking for tips about ‘the stars’ secret photos and videos’ through its official website and openly giving notice that tipping fee would be given.

The sasaeng fan that can’t realize the seriousness of the problem, “He only told me to come and I got only one tap.”

“It was recorded by a sister who was with me; I didn’t know that that sister has spread (the audio file). I got only one tap, I let out the ‘ah’ sound and the gasp sound is also mine. I didn’t get hit that much. He only told me to come and I got only one tap.”

In the voice of an anonymous sasaeng fan which <Entertainment Relay> interviewed, we couldn’t find the seriousness of the situation. We can see that the producers didn’t even question the psychology or think about the concrete situation regarding the acts of the ‘sasaengs’ who stalk the stars. They only briefly checked on the time and the situation before airing the program.

Indeed, they explained that ‘the fans who follow the celebrities and dig all their privacy are passionate fans’ and tied it up with an interview of general fans, introduced sasaeng fans as normal fans. On the other hand, the voice of JYJ Kim Jaejoong in the audio file was broadcasted numerous times. Nonetheless, the voices of JYJ’s members who have officially apologized during the press conference in Chile were nowhere to be heard.

However, at the time JYJ left for South America, <Entertainment Relay> was airing the interview with the reporter of related media (T/N: Dispatch). What was worse, through that interview, they added more reliability to the article by emphasizing the violence, “The singers have different ways to deal with it. In some degree, although there were some singers who have verbally abused, I think it was quite actually shocking to do violence.”

In the absence of JYJ? An investigative report that failed to convey a balanced voice.

Through a lawyer, they confirmed that JYJ’s act could be considered as assault but there was no penalty. “Since this assault is ‘no-prosecution-contrary-to-intent’, if the victim doesn’t sue, the artists won’t be punished.”

On the other hand, <Entertainment Relay> also demonstrated a superb beauty of editing. The remarks of a pop music critic were suitably disposed in order to meet the intention of the producers.

“Sasaeng fans are stalkers. Since it has come this far, wouldn’t they be seen as stalkers? Those acts could certainly be prosecuted.” <Entertainment Relay> has arranged this remark of the critic in the first half of the program and “In the perspective of the stars or of those who protect the stars, they shouldn’t be punished for using violent method to protect their given rights,” in the second half, showing that they want to shift all the responsibility of this assault controversy to JYJ.

The reporter’s comment was, “Obviously, there is problem with the fans that violated the stars’ private life. However, the extreme reaction of the stars was not right either. A more mature attitude is needed.” It was no more than a typical ‘both-side’ theory that stands on mechanical neutrality. We couldn’t hear anything from JYJ’s side, how can this report be considered as an in-depth coverage?

We will give you tipping fee, please give us the stars’ secret photos and videos~!

The insufficient and irritating report of <Entertainment Relay> was already predicted. On the 10th, via the viewers’ tipping board on its website, <Entertainment Relay> has given a notice which read, “Please send us tips about the stars’ secret photos and videos that only you know! Tipping fee will be given to those who are chosen.” Instead of stamping out sasaeng’s act, they encouraged it.

Also, they have met a sasaeng fan who have been active from TVXQ days and asked her if the ‘assault incident’ of Kim Jaejoong and Park Yoochun that had been surfaced recently was true and asked her about the actual activities of sasaeng fans.

In addition, <Entertainment Relay> has given a provocative notice that they had in hand an another audio file in which there was Kim Jaejoong who had to suffer from sasaeng fans during his vacation and Kim Junsu who caught sasaeng taxi and tussled, which is said to be able to show the extreme stress and the painful feelings of JYJ due to sasaeng fans.

They have also added, “You will be able to see vividly the true nature and the problems of sasaeng fans, to see if the violent act of the artist toward hardcore fans, to see the status of the so-called ‘sasaeng taxi’ hired to chase after the celebrities, the daily routine and the psychology of sasaeng fans, the reaction of each celebrity to sasaeng fan, ect.” But this much information wasn’t adequately conveyed in 5 minutes of edited screen. 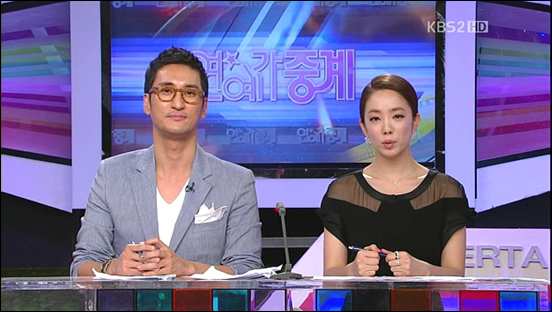 JYJ’s first real debut in KBS’s entertainment program has come to an end like this.

It’s a well-known fact that, due to the uncomfortable relationship with SM, group JYJ that is comprised of former TVXQ’s members has been working as ‘faceless singers’ in TV entertainment programs. In the broadcast on the 10th of <Entertainment Relay>, JYJ has the first real debut in KBS’s entertainment program. However, only the voice of Kim Jaejoong in the audio file, the cut from music video, the cut from the performance in 2010 <KBS Drama Awards> and a short video of the press conference in Chile were aired.

JYJ’s fans are strongly objecting to this report of <Entertainment Relay>. From the airing day till the 11th, there was hundreds of protesting writing in its viewers’ bulletin.

The ID ‘vipchj’ has criticized <Entertainment Relay> as below.

“Firstly, during these 2 years, JYJ have been vigorously active more than any artist. You haven’t reported about it even once but only reported about sasaeng-related issue. Secondly, today the very first South America concert of Korean artist was held in Chile but you didn’t mention about it at all. Thirdly, you didn’t report in detail how long sasaeng fans have been stalking JYJ but only simply reflected them as hardcore fans. Fourthly, all the fans already felt angry toward the report. Nonetheless, after finishing the program, the main MCs even exchanged jokes about sasaeng, which made us feel like we were fools. Fifthly, you compared them, who have been idols and have been suffering the severe harassments of sasaeng for 9 years, who were in very difficult time due to the conflict with former agency, with normal celebrities.”

Via SNS, the followed line was repeatedly retweeted, “I want KBS Entertainment Relay to be abolished. RT! Let’s see how much it will be retweeted!”

Eventually, I doubt whether <Entertainment Relay> shed light on JYJ assault issue from various angles, whether it properly distinguished between right and wrong regarding the assault, whether it dealt in a balanced way with the seriousness of sasaeng fans that have been rebuked by the public after the assault case has surfaced online. JYJ’s first real debut in KBS’s entertainment program has come to an end like this.

Source: Oh My News via Nate
Translation by: Hannah for TheJYJfiles
Please do not remove without full credits.

7 thoughts on “[NEWS] 120311 An in-depth report about sasaeng fans? The first but vain appearance of JYJ in entertainment program of terrestrial TV ‘Entertainment Relay’”